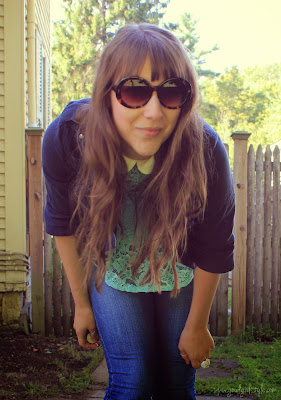 {my favorite sunglasses. yes this is relevant to the post. read on}
Wait, WHAT? I know, I know, the title is a little shocking. Sorry. Let me explain: Joseph Gordon Levitt made a Hollywood movie ABOUT porn (and it’s negative effects), and he made a fun promo video, and Natalie (that’s me) is in the promo video.
Yeah that’s still confusing.
Let me start over:
Last year I partnered with it! Books by Harper Collins to show you The Tiny Book of Tiny Stories Volumes 1 and 2. The books are produced by Joseph Gordon-Levitt (y’know, from Looper/Inception/500 Days of Summer?) and his cool artist-collaboration organization Hit Record. I checked out Hit Record last year and made a profile, uploaded a story, got terribly nervous and stage-fright-y and immediately deleted it.
But this year on Twitter I saw one of Gordon-Levitt’s (JGL from here on out) cries for video from people to answer the questions: What are your favorite things? Can you love things? Can people be your favorite things?
These are some of the questions JGL’s new movie Don Jon (which he wrote, directed, and starred in) explore, along with the themes of pornography and their effects on real-life relationships.
Nothing like a philosophical pondering to get me on board. So one Sunday afternoon when I was bored and feeling on the edge of brave, I fumbled to remember my password to my HitRecord profile and uploaded a video, not expecting anything other than to delete it the next morning when  I came to my senses. But I actually totally forgot about it. My answer was pretty long, but in essence I said, “Yes, people are capable of loving things, and loving people as things, but we shouldn’t.”
But I also told JGL I loved my sunglasses. And apparently he liked them, too.
My video clip made it into one of HitRecord’s new promotional/exploratory videos for the Don Jon movie premiere. Here’s the video (can you see meeeeeeee? I’m even in backwards-motion/black and white all-fancy-like):
I’m really excited for the premiere of this movie. I won’t lie: It’s gritty. It’s graphic, from what I hear. And I have thought long and hard about whether or not that discredits its motive and message. But from where I’m standing, while this is a movie with a message, it isn’t a motive-driven movie. It isn’t a Christian movie (to be honest even Christians don’t like to talk about pornography openly). It’s a vision-driven movie, and that includes the whole artistic vision and the grit that makes it realistic. It showcases JGL’s real creative chops as he steps behind the camera for the first time with a gutsy, bold concept, standing ankle-deep in the dark waters while the sharks of Hollywood criticism wait hungrily.
“Everyone knows it’s fake but they watch it like it’s real life.” ~Don Jon
But a movie in Hollywood written, directed, and starred in by a bona fide star that takes on the porn obsession in American with something other than Photo-shopped, light-drenched, Technicolor Hollywood glory? I’m willing to see where that leads. Here’s the trailer:

I’ll check back in once I get a chance to see the movie. It premiers tomorrow (Friday, September 27th).

Until then, what are your thoughts?

EDIT Sunday 9/29: Just got back from the movie! I’m sad to say I canNOT recommend you go see it…it is *very* graphic and there are far, far too many F-words. Sorry friends 🙁