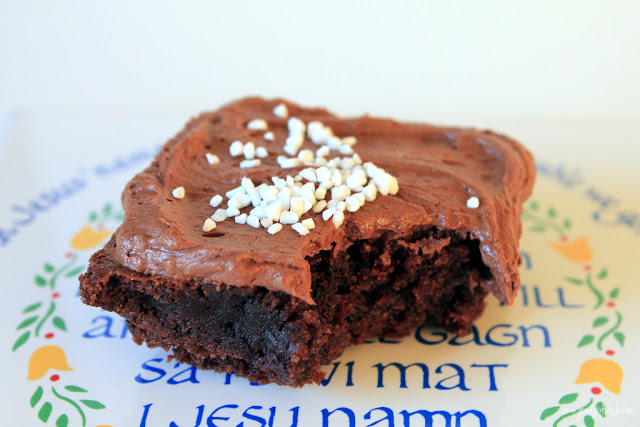 This is the first of a few New Nordic recipes I’m creating in collaboration with King Arthur Flour. Brownies are all-American, but I’ve incorporated Scandinavian flavors of ginger, orange, and traditional Swedish pearl sugar. My friend who lives in Sweden says that these could also be baked in a round tin and called Kladdkaka, an unleavened chocolate cake with a gooey center. If you follow me on any social media platform (you totally should, I’m hysterical on Twitter and sappy on Facebook), you’ve seen me raving about these brownies. And discussing techniques for cleaning frosting off my keyboard. 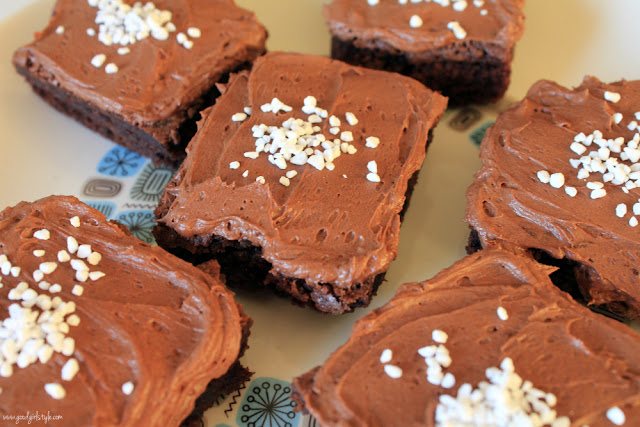 Uffda. These brownies.
They are incredible.
They are rich, chocolatey, gooey but not underbaked, and they have a nice crunchy crust and firmer edges.
I honestly think they are the best brownies I’ve ever had, gluten-free or not. 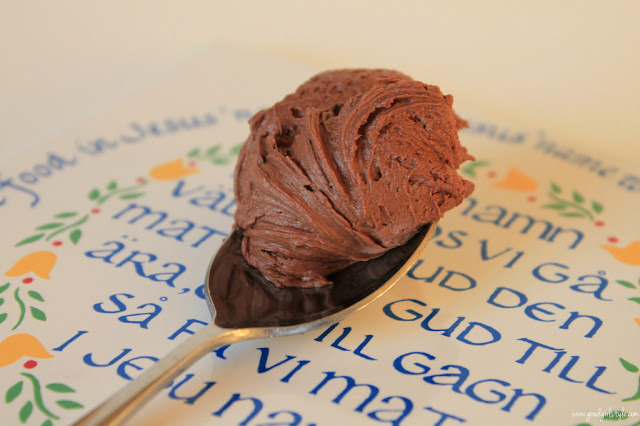 The frosting?
It tastes exactly like a Terry’s Chocolate Orange.
Good enough to eat by the spoonful, followed by a gulp of ice-cold milk.
I think it’s the next “Nutella.”
As if Nutella would ever be “over.” But seriously.
The frosting recipe makes just enough extra for a few spoonfuls (I think of these things. Aren’t you glad we’re friends?). 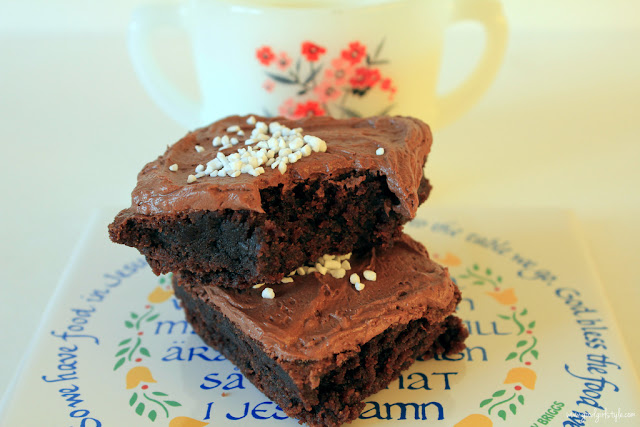 If you didn’t watch the King Arthur Flour ingredients video, you might be thinking I’ve gone crazy and added giant crystals of kosher salt to my brownies. Fear not, it is actually Swedish Pearl Sugar! This texture switch really makes these brownies knock-out. The fudgy brownies, the whipped frosting, and the crunchy sugar. Orange, chocolate, ginger, and pearl sugar? A match made in New Nordic heaven.

(recipe adapted from King Arthur Flour)
4 eggs
1 1/4 cups cocoa powder (Dutch-process preferred)
1 tsp. salt
1 tsp. baking powder
1 tsp. ground ginger
1 cup (2 sticks) unsalted butter
2 1/4 cups sugar
1 1/2 cups King Arthur Flour Gluten-Free Multi-Purpose Flour
2 tsp. grated fresh ginger
Note: This is a unique technique, but don’t let it scare you off! It works, I promise!
Preheat oven to 350 degrees F. Lightly grease or line with parchment paper a 9″x13″ pan. Beat the 4 eggs with the cocoa powder, salt, baking powder, and ground ginger. This will be a very thick concoction. Now, in a small saucepan, melt the butter and add the sugar. Heat until thoroughly hot but not simmering, being careful not to scorch the mixture. Combine the two mixtures, adding only a little of the hot butter to the egg mixture at first to temper the eggs. Then stir in the rest of the mixture. Stir in the flour and fresh ginger until just combined. Pour into prepared pan. Bake for approximately 30 minutes or until a cake tester comes out clean.
Chocolate-Orange Frosting (by Good Girl Style)
1 stick unsalted butter
1 1/2 cups powdered sugar
1/2 cup cocoa powder
1/2 teaspoon Orange Oil from King Arthur Flour
2 Tbsp. milk
Swedish Pearl Sugar from King Arthur Flour
Beat the butter. Then sift in the powdered sugar and cocoa powder, and mix, scraping down sides frequently. Add the orange oil and the milk and beat until whipped.
Cut and frost brownies when cool, and sprinkle with Swedish Pearl Sugar. 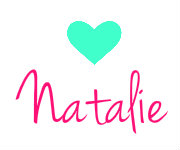